The first Heirodule's all built. I finished up the body and weapons this week, magnetizing all six of them for maximum flexibility. I'll be finishing up the second one this week and working on the 'phant as well. After that it's on to the three Harridans I'd like to build. 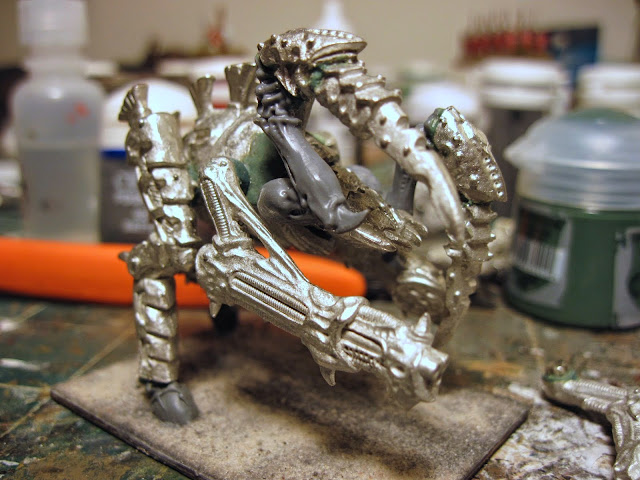 The Scything Talons up front are its regular talons with a few sections taken out. I used some 40k Trygon arms for the lower parts. 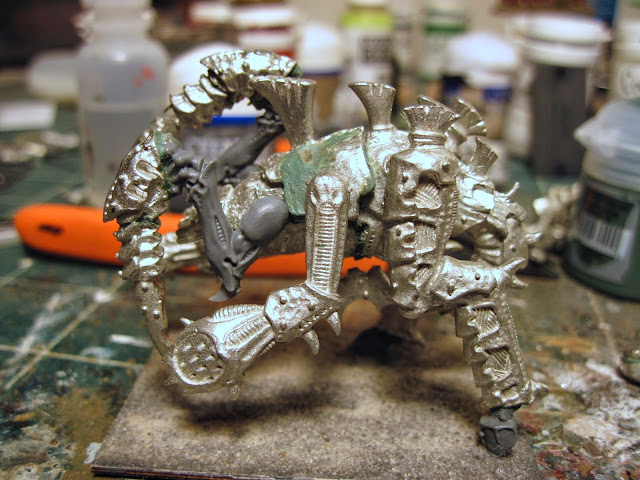 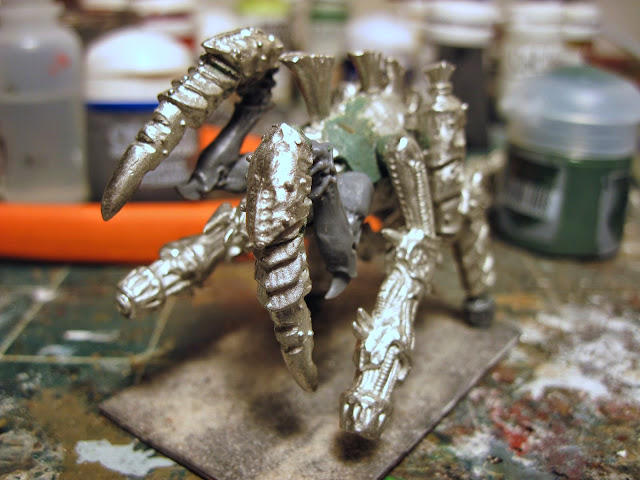 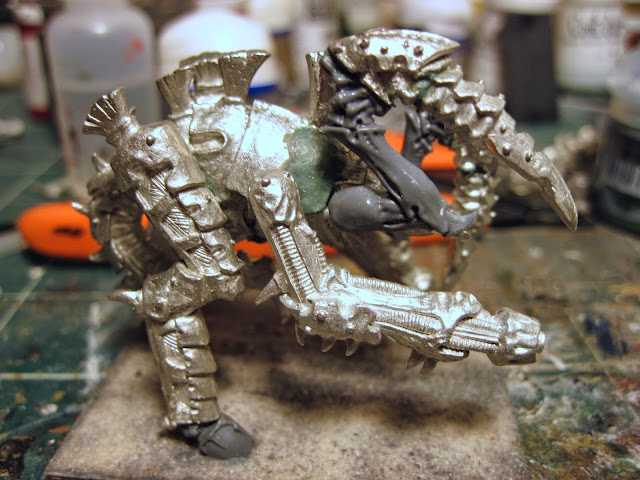 I call this the "Maybe little pinch?" configuration. 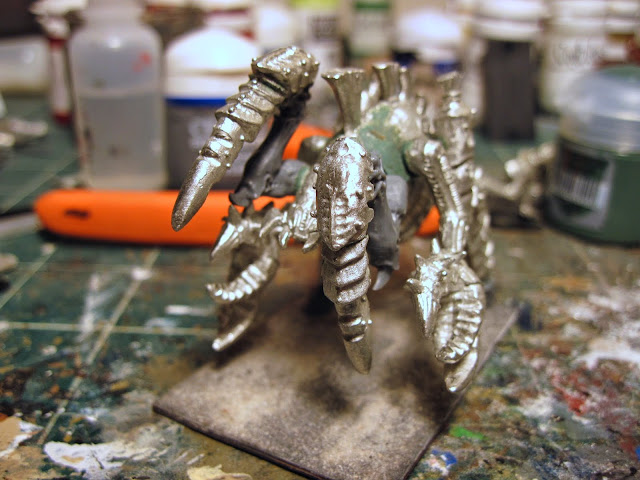 I finished up eight bases of trees for the snow terrain, just four more to go. I picked up three bags of 21 trees for something like $12 at a Home Depot right after Christmas. They're normally $6 a bag, which is still pretty cheap at $0.30 a tree. I'm still combating the mats curling, I've got two getting the rubber spray on their undersides at the moment to see if that helps. 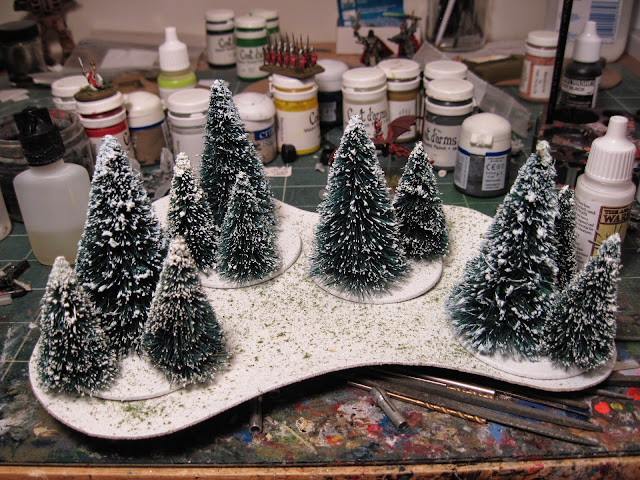 I also puttied one of the Heirodules this week. His arms are done as well, I just need to glue them on. I'm hoping to get the other one to the same point next week and magnetize the weapon arms as well. 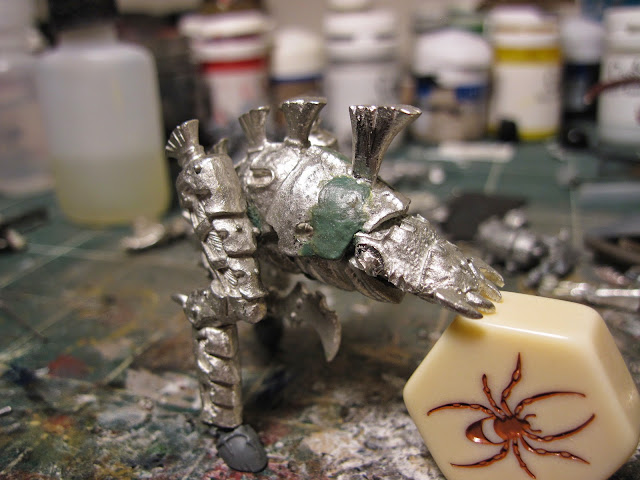 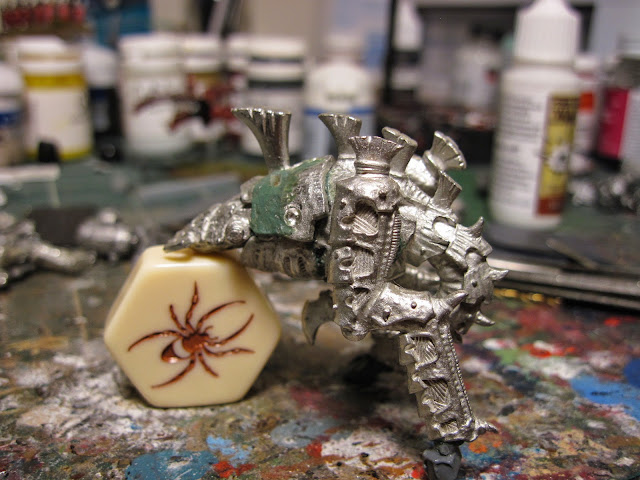 I've been slowly building and converting these past weeks. First up are some shots of my Heirodules. I never liked how these things walked on four legs and on the tops of their claws while looking up at the sky, so some heavy converting was called for. 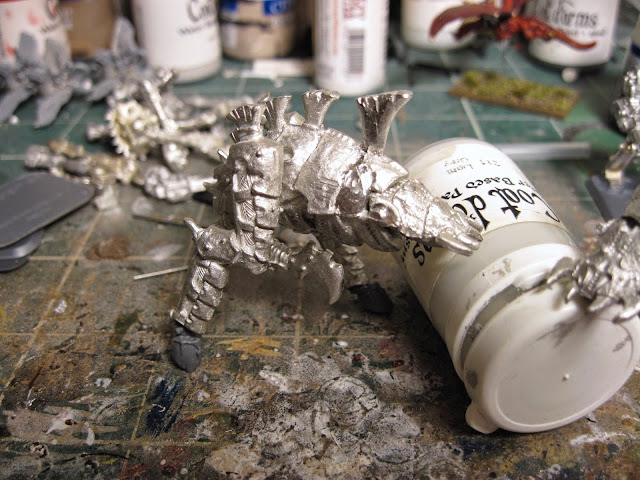 To get them on two legs and off their toes I clipped off the toes and replaced them with 40k Warrior hooves. They're somewhat balanced but at the moment I'm hoping that the glue on the base will be strong enough to hold them upright. If not, I'll have to get creative. To keep them from looking up at the sky I took a saw to the body and head where they meet the thorax. That'll need some putty. 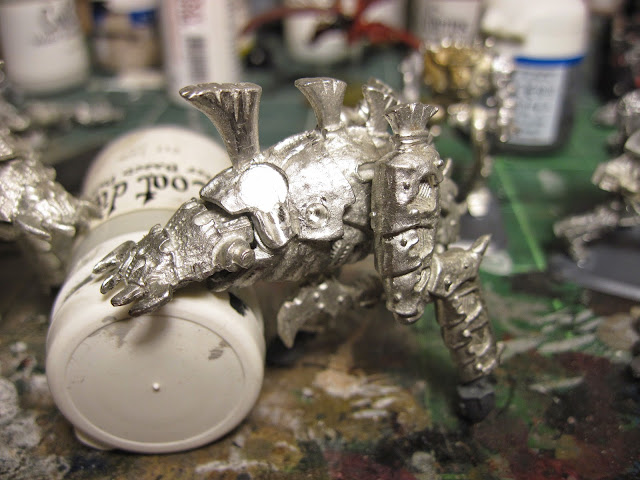 These are their front claws. I shortened them and used 40k Trygon arms here. The plan is to attach these to the head, where the weapon arms normally go. The weapon arms will be magnetized on the thorax, and will sit below the body. I thought it would look better and match the aesthetic of everything else: claws up top, weapons in the middle, legs. 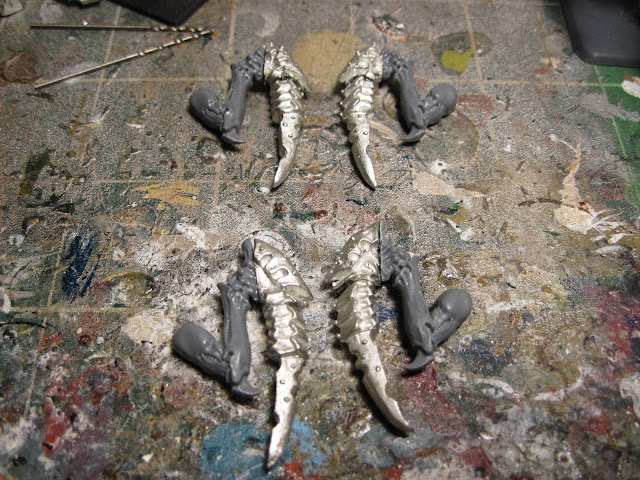 Next up are some Knights. Here's my Baron, sans a few skulls. 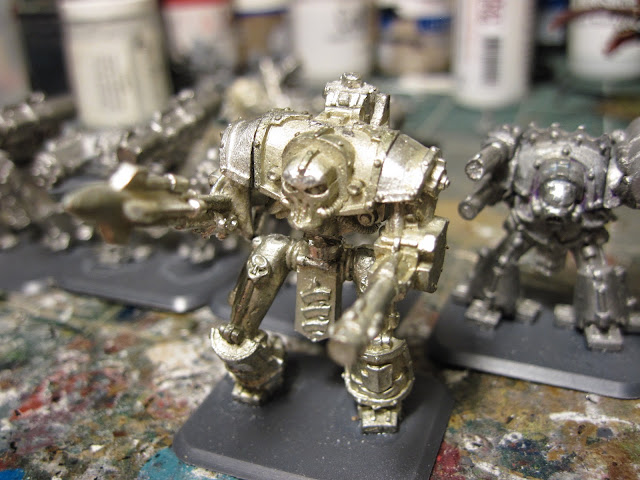 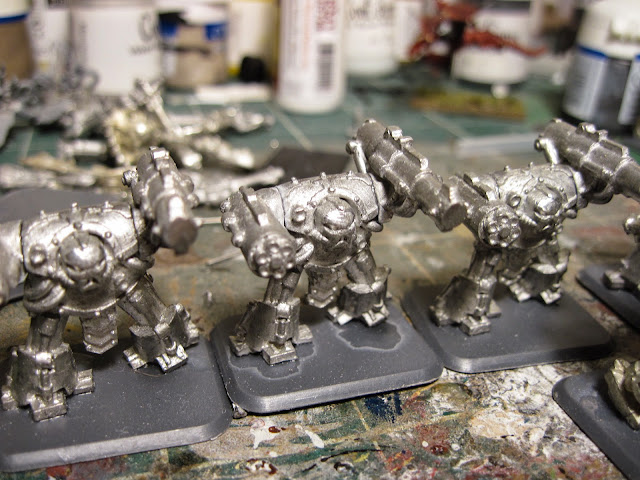 And Crusaders, not much conversion on either of these. 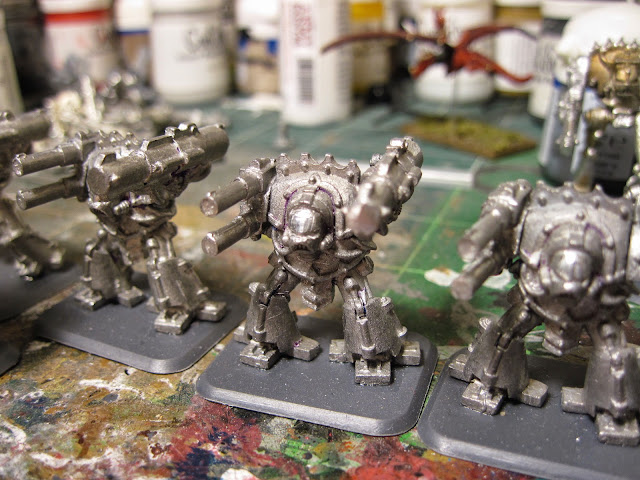 Here's my first three Lancers and their Seneschal. 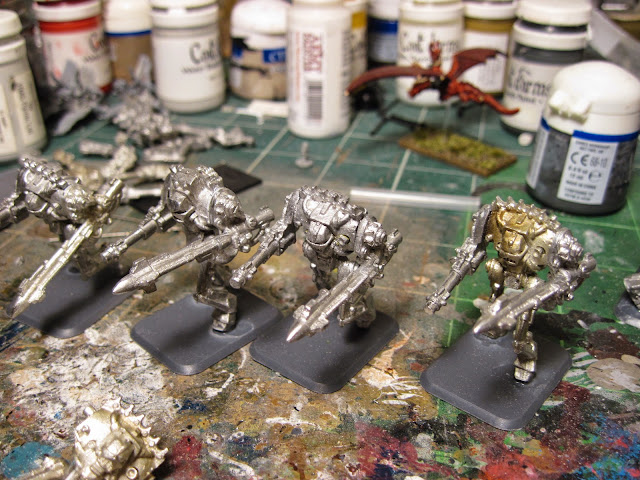 The next three I'm converting to be right leg up, left down. It's opposite of the stock pose and I figure it'll add some variety. 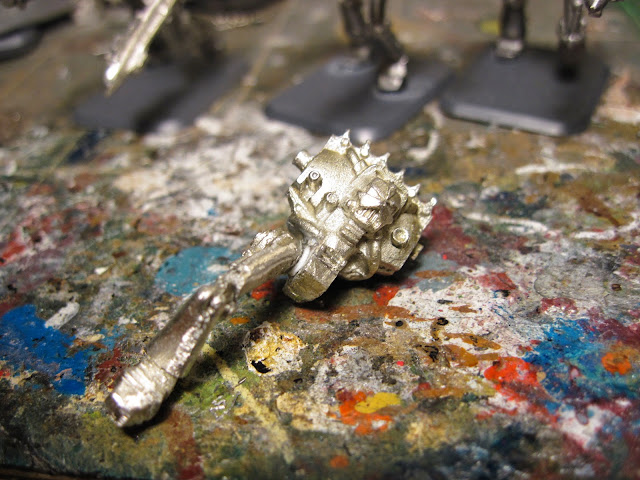 For my Paladin Seneschals I just gently bent the legs a bit to give the impression of them walking. The weapon positions also add to the effect. 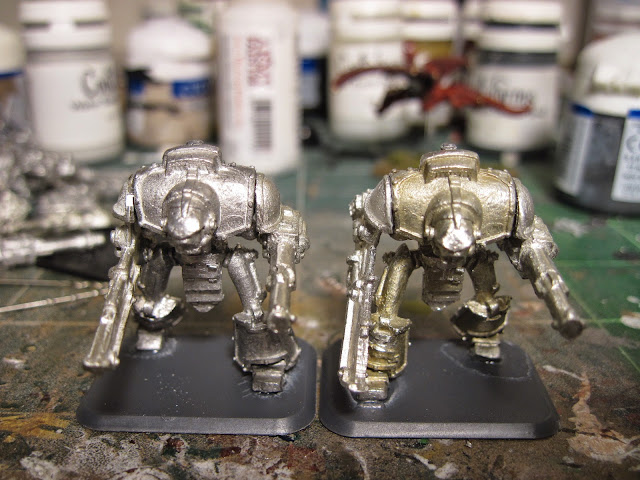 Finally, the Errants got the same treatment but I also removed one of the sections between the leg and hip as it looks a little more natural. This required some extensive pinning though. For the next four I'll be doing the same thing and seeing about twisting the torsos in different directions. 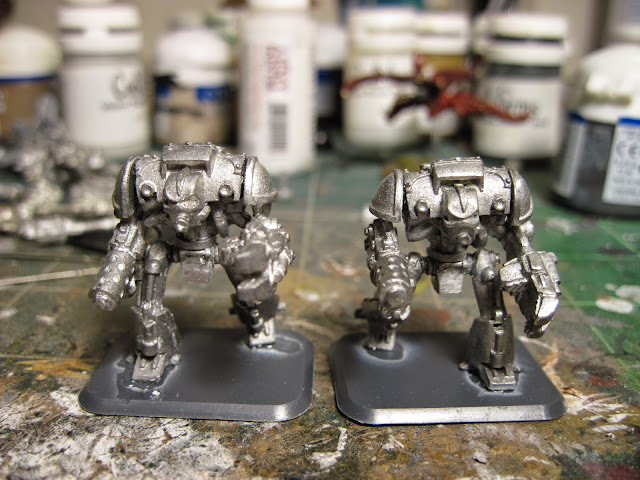