I finished up the hills and a quick repaint of the desert and waste boards at my local store last Friday. The scatter terrain pieces got their base coats last night. 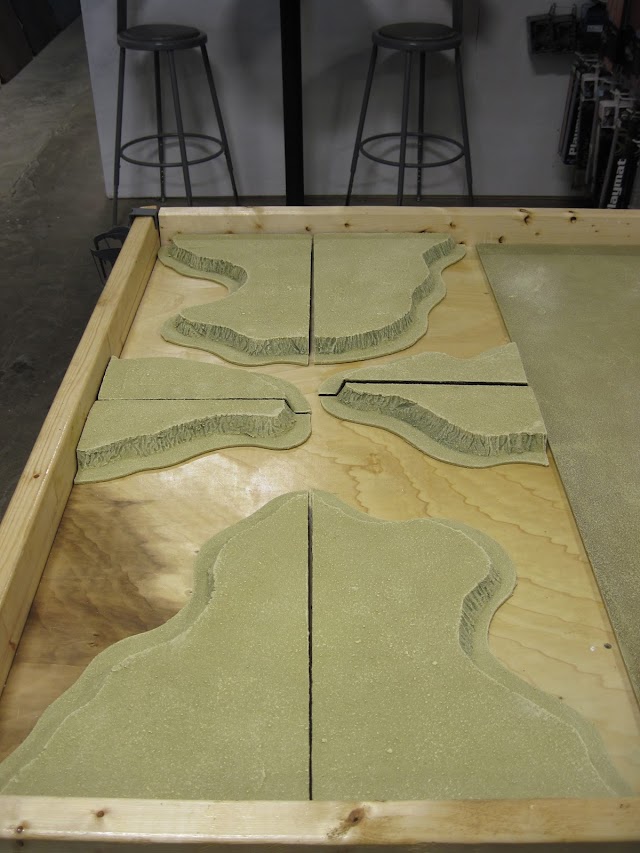 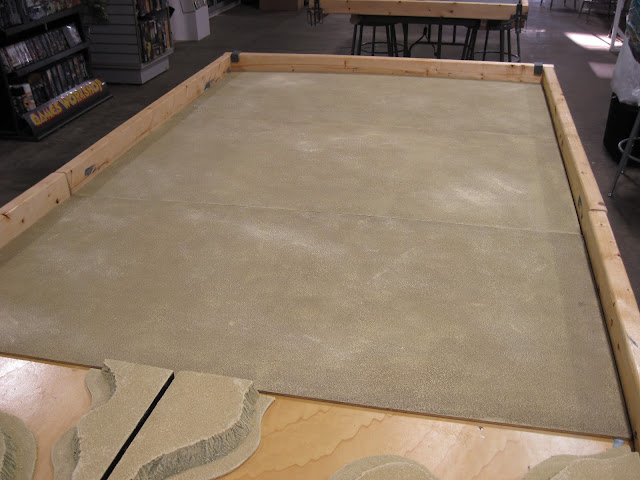 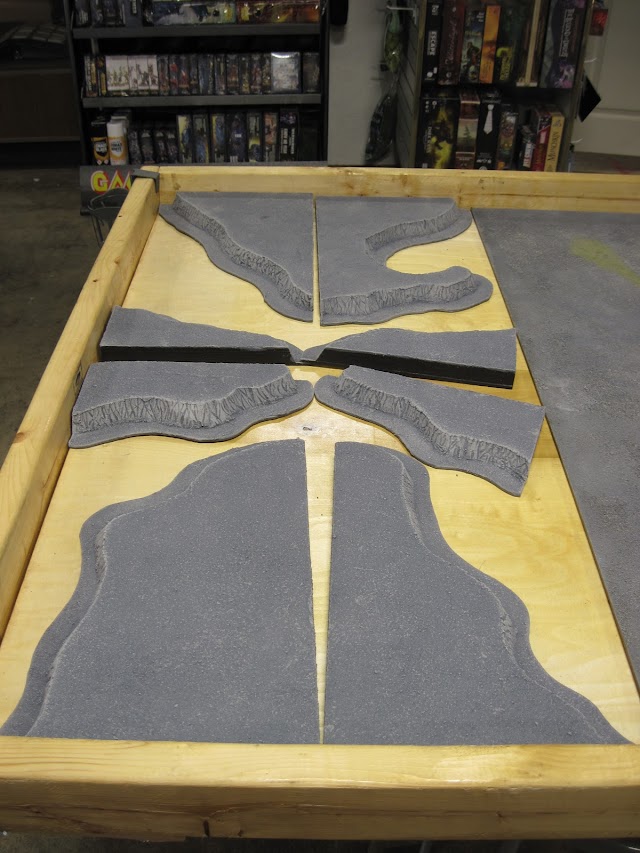 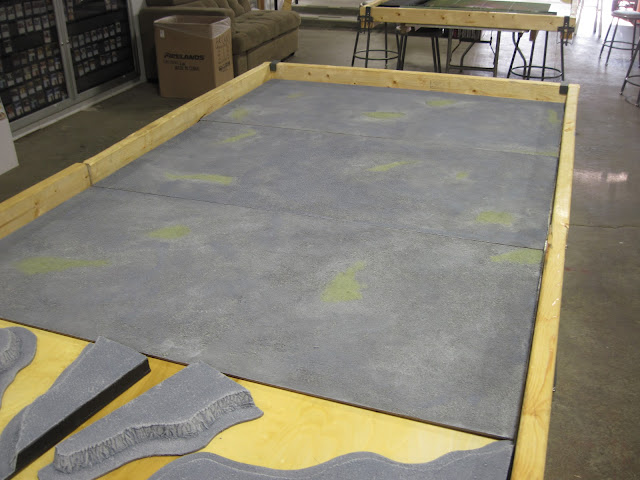 I also finished up the Firestorms, they got their last three orange highlights and their bases touched-up. 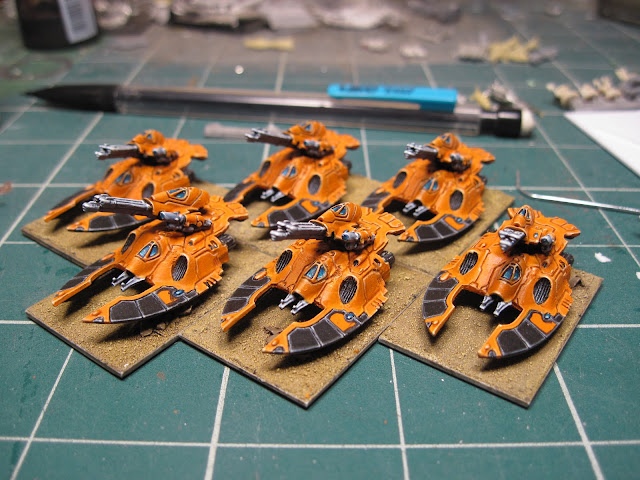 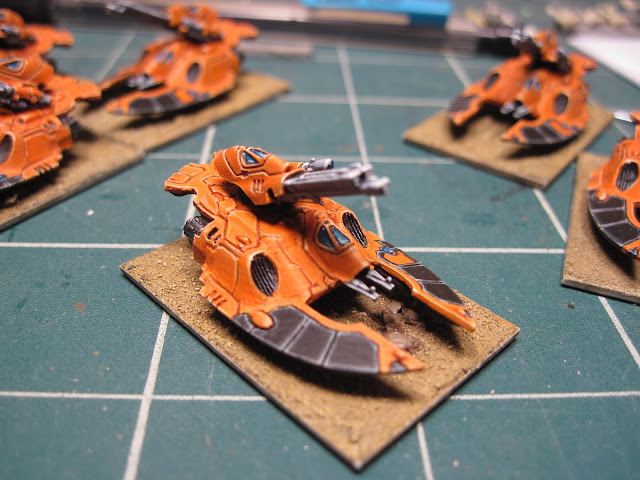 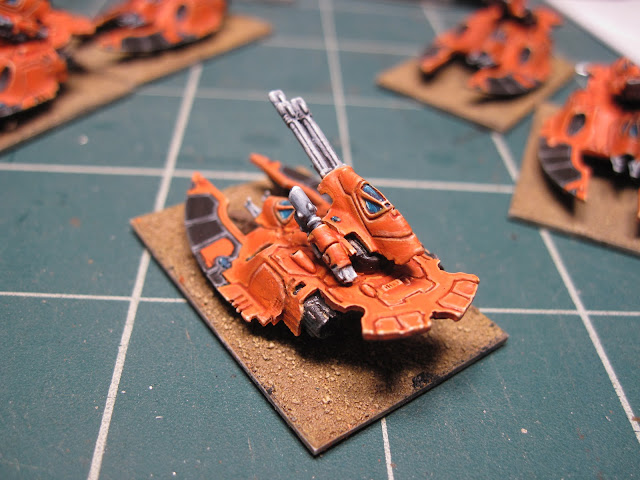 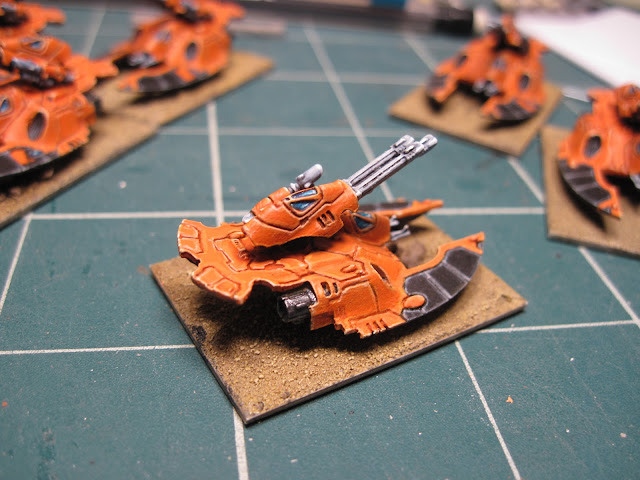 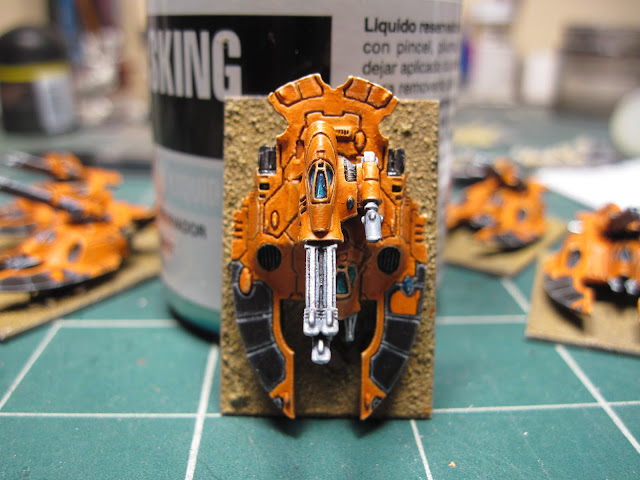 I was going to start in on my aircraft but I realized a painted army is within striking distance for Fall In, so I switched gears and got most of the way through my Farseer character upgrades. I need to add a highlight to the rune armor and bases, then highlight the black and do the gems. Any thoughts on what I should do for their topknots? Right now I'm leaning towards the same blue as their weapons. 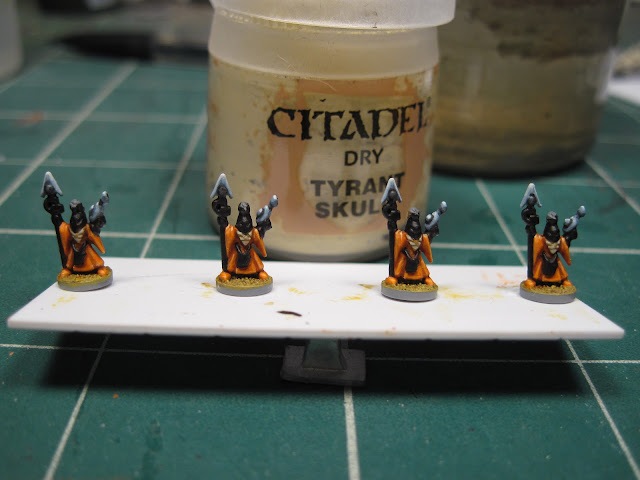 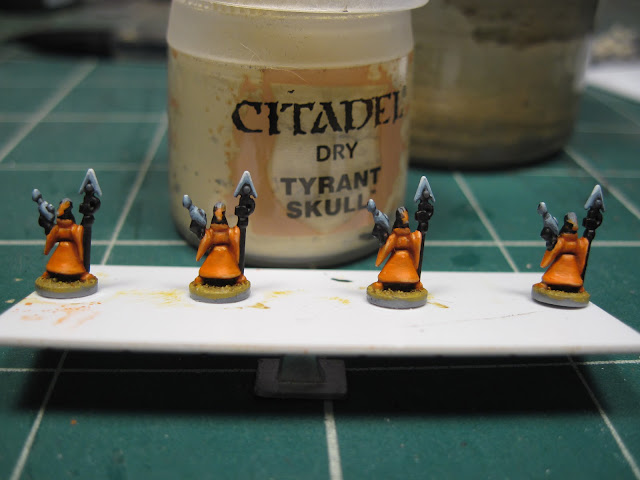 I made two sets of eight hills for a local store, all they need at this point is some paint to help them match their tables (desert and grey wastes). They're made out of 1" insulation foam glued to tempered hardboard bases with some construction adhesive. I used a foam cutter to put some surface detail on their faces and covered everything with scenic dope (qt of latex paint, 2 latex caulk tubs and a cup of joint compound) for durability before pressing in the sand and spraying them with glue. 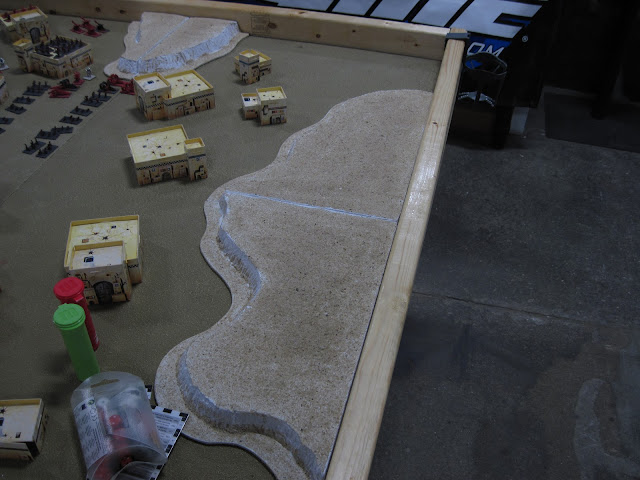 There's four bigger (18x12"-ish) and four smaller (12x6"-ish) pieces per set. They were cut out of 2x2' panels, I used the right angle corners so they join up easy and made them geomorphic. By that I mean the bigger pieces can be joined together and the same with the smaller. Also, the short edge on the bigger pieces match up with the longer edges on the smaller pieces. They can also be stacked, so there's lots of ways that you can put them together. 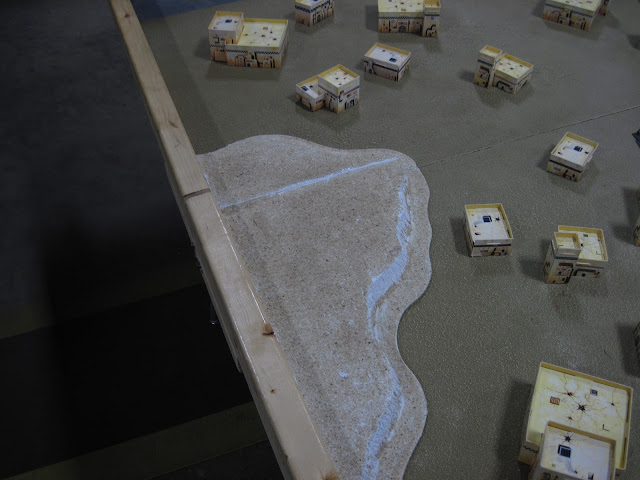 I was also able to cut six bases of scatter terrain per set out of the left over hardboard. No pics of those yet, I'll likely put a few rocks and some brush on them and make trees or something on smaller bases that can be moved around the area and not get in the way of the miniatures. 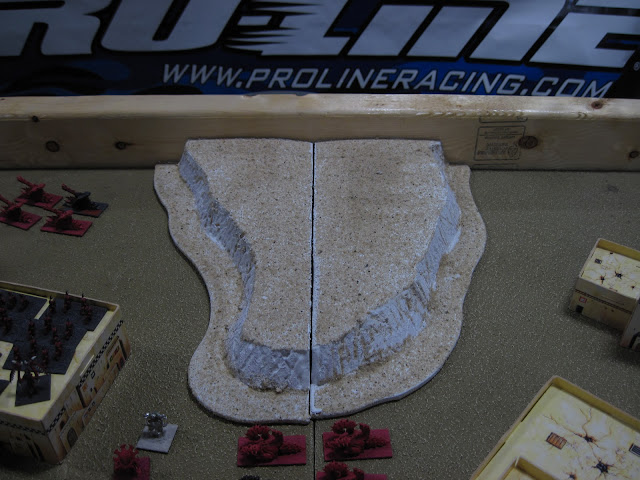 They were pretty cheap, price-wise. You can make four sets (32 hills, 24 scatter terrain pieces) for some $50, not including paint. They just take some time to put together. 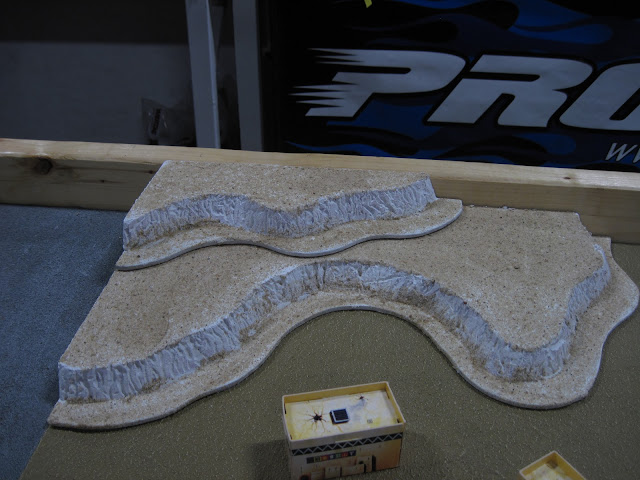 I misplaced my camera for a bit but we're back. Not as much progress as I would have hoped in three weeks, but I've been working on some terrain for a new store in my area and also playing some Epic once a week too. Hopefully I'll have some pictures of the terrain soon. The gems and weapons are now finished up on the Firestorms. I also did the first highlight on the orange. Three more highlights and they'll be good for the clear coat queue. 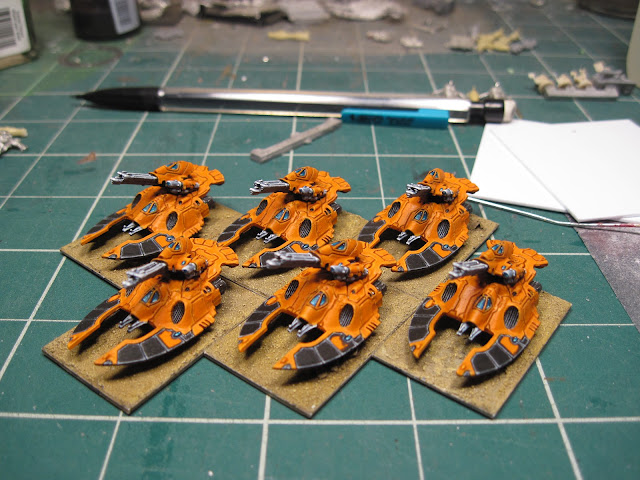 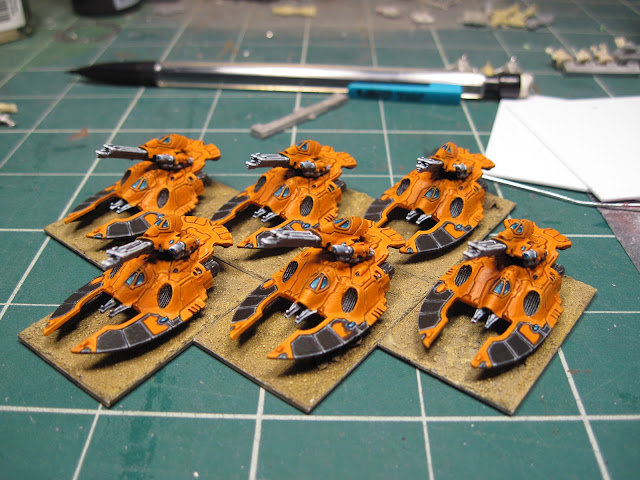 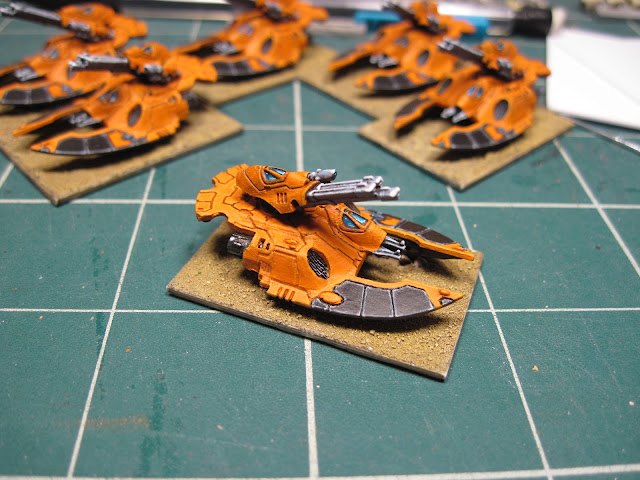 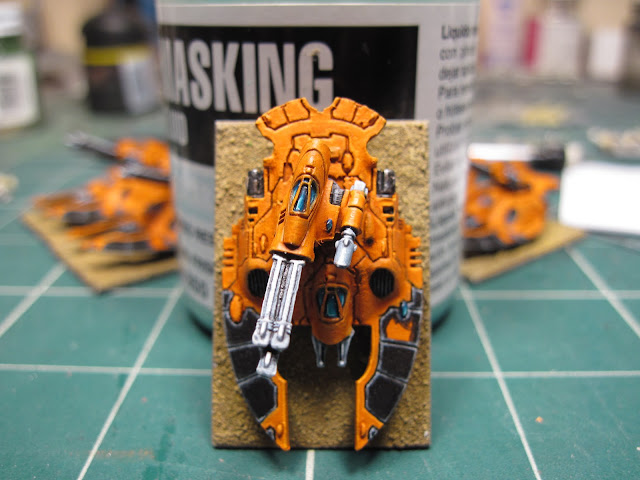 I also started on this guy. The repositioning is set (striking his best Captain Morgan pose), I just need to go back and putty the joints I cut. The wings I'll put on after things are painted as it be too tight otherwise. Also, the weapons are magnetized using 1/16" diameter magnets. 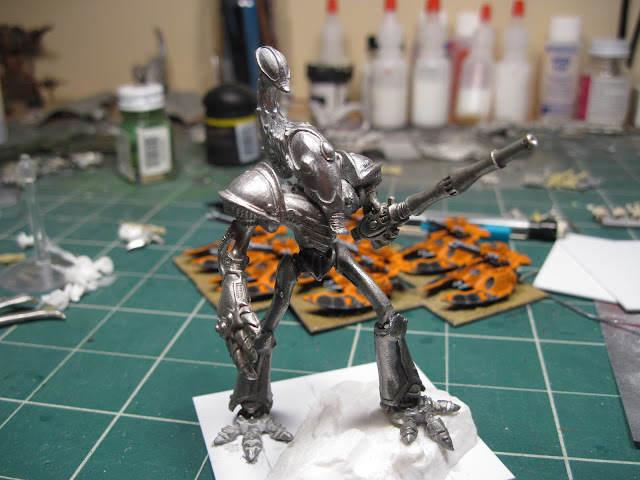 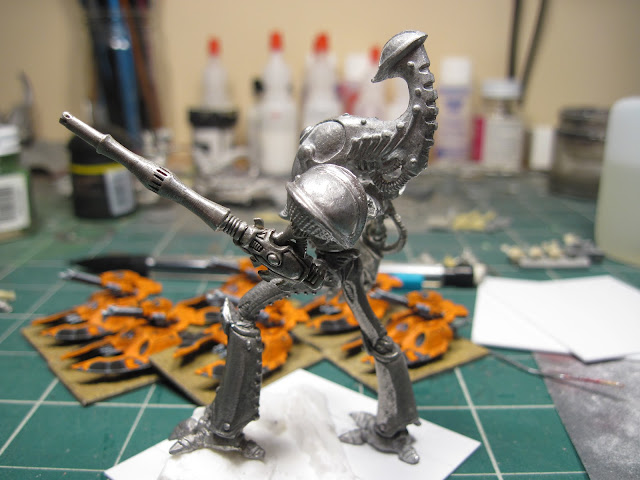