I finished the Landing Craft itself this week, all that's left is the base. I'm planning on working on my SM Characters and Dreads next week so I'll throw it in with them when I prime. 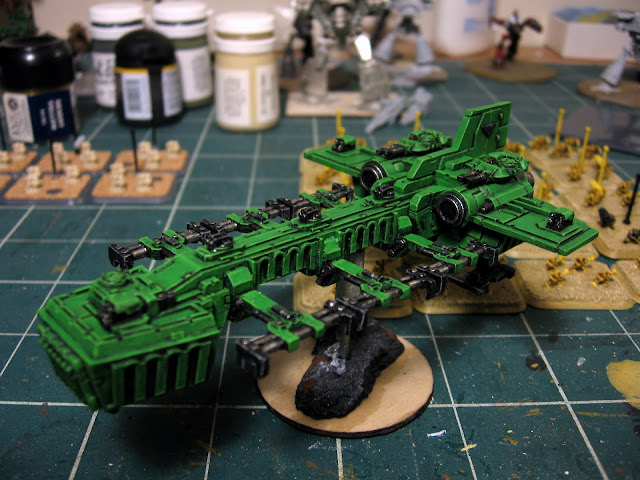 I also finished building and puttying the other Gargant, and managed to get my Great Gargant built. The Great still needs some putty work but the regulars have been yellowafied. 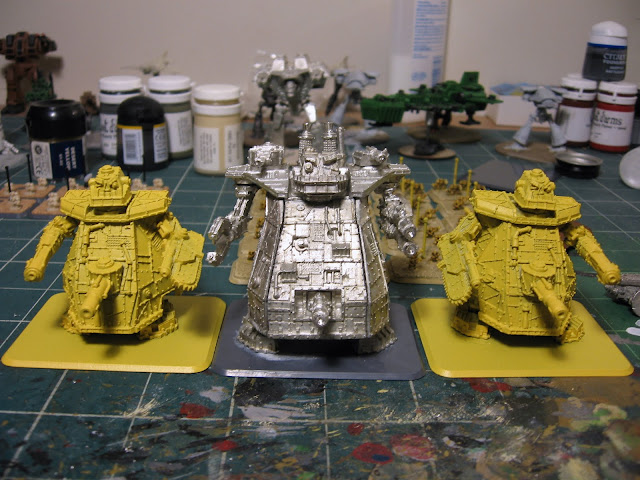 And some more yellowification on my bikes. 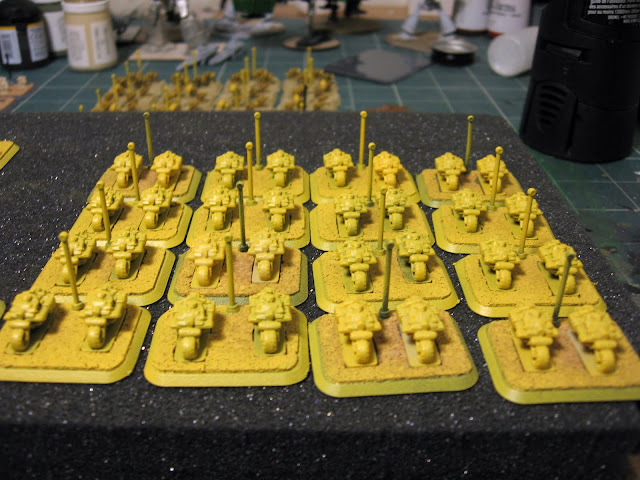 And the second bunch of warbands. 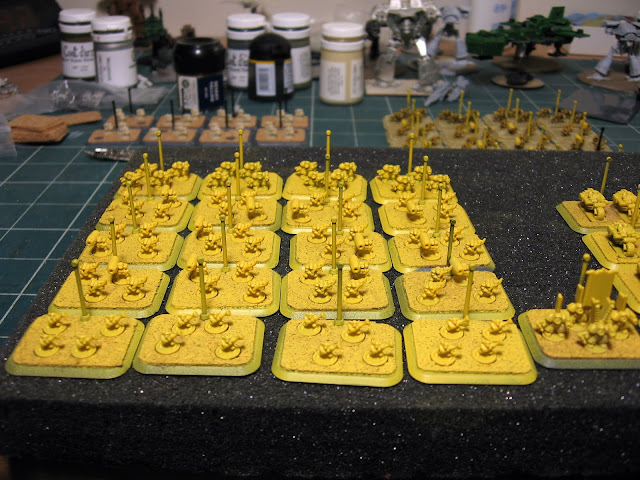 Was kind of all over the place this week, more than usual anyway. :P

I did the basing on the Orks I primed last week and got the first wash on them. 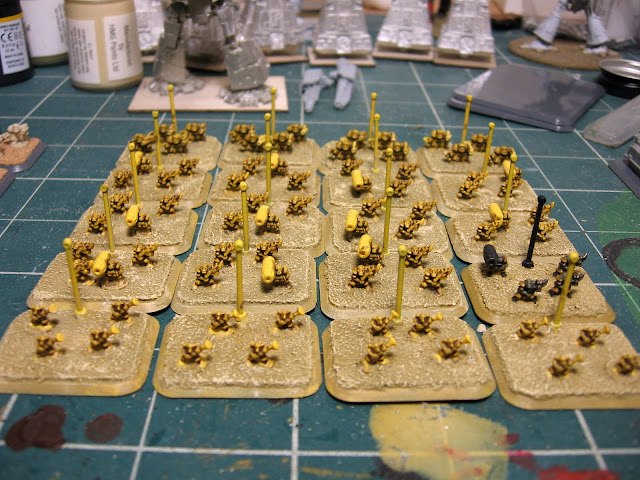 Another 20 stands are ready for priming now too. 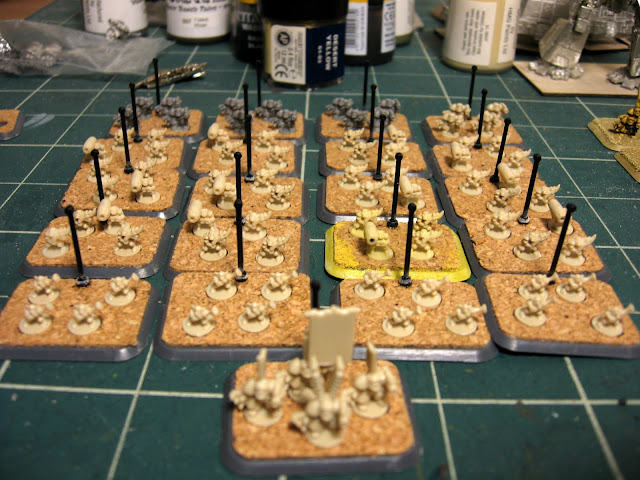 I did a little bit of converting to make a Warlord in a Nobz stand. I just took the back banners off of a Warlord and put it on a Nob. The banner bearer is a Nob body with the left arm from the Warlord, and the banner from a Banner Boy. I used some brass wire for the pole. 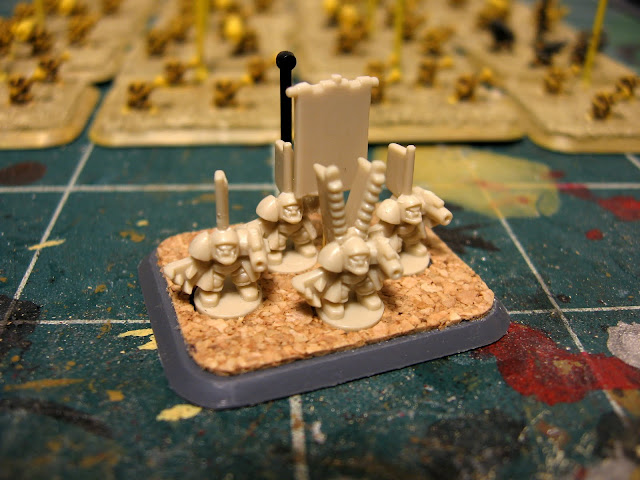 I also finished my other three Flakwagonz, here's a shot of all four of them. They need a little bit of putty work but otherwise are ready for priming. 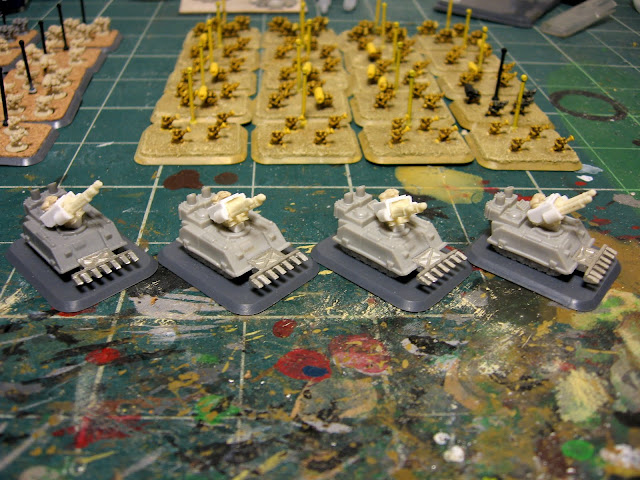 Finally, I started the cleanup phase for the Landing Craft. This guy will be my main priority next week so I can try to finish it before the end of the month. 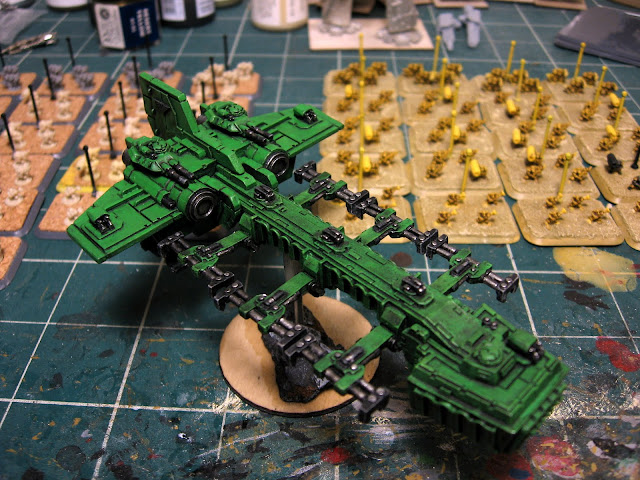 Despite all my Necron building at the beginning of the year it looks like Orks are going to be my next army. I actually got these 20 stands (and 20 more) built sometime in Dec/Jan. I picked up some Army Painter spray last week to get them primed/base coated and this is how they turned out after some basing as well. 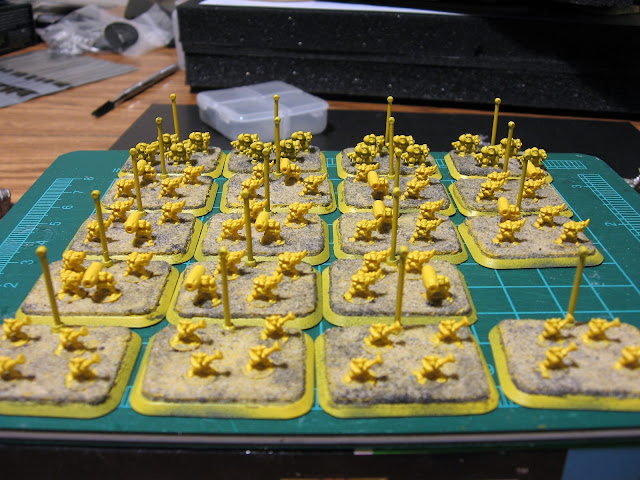 I'm going with a desert scheme. For the test stand I washed the yellow with Devlan Mud, painted the skin, shirts/kit, bolter and metalic bits, highlighted the black, washed with Devlan Mudd again, and then went back to highlight the skin. It went pretty quick and I'm happy with the result, what do you guys think? Five points to the person who guesses which Clan they are. 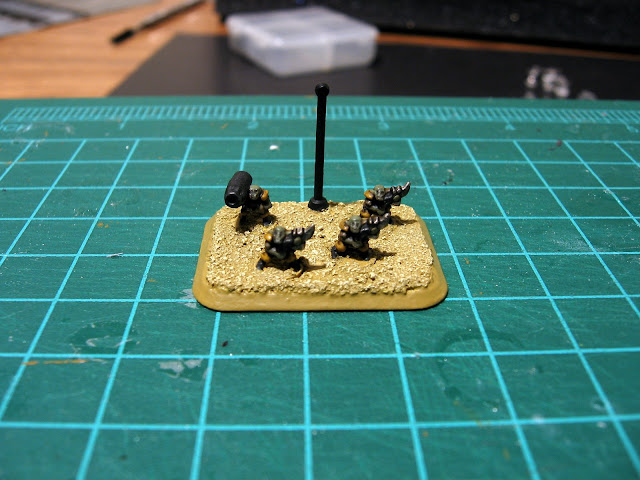 I finished these up Friday night, they're going to be Big Wagonz. I took a E40k Land Raider, cut out the front ramp, moved it back, and added the death roller and bug guns which I took from E40k Shoota boyz. 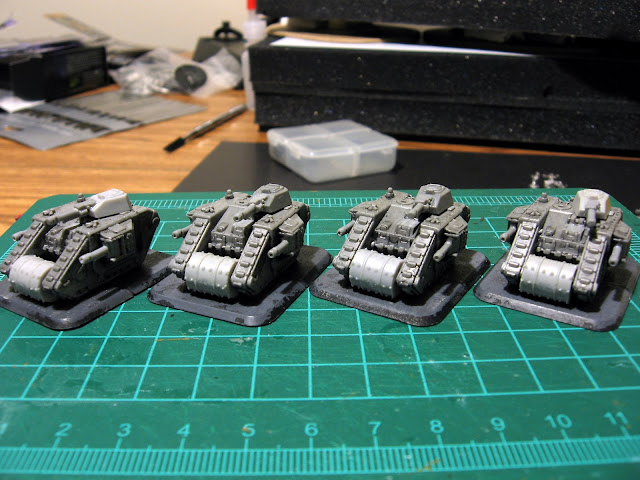 These are my Gun Wagons. Just a simple conversion of a barrel swap with a E40k Shoota boy and a Imperial Dozer blade. 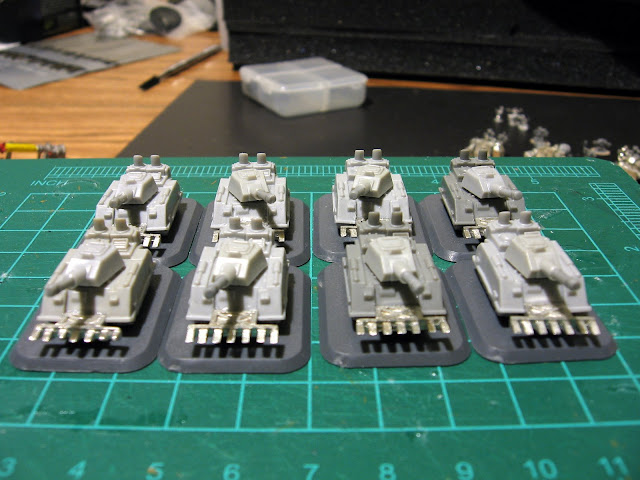 My two Gargants (named De and Dum and this point). I magnetized the Big Choppa arms in the hopes of later converting some Soopa/Supa-Zap guns for them. Dum needs a little more work and puttying but he's almost there. After them I'll have a Great Gargant to build. 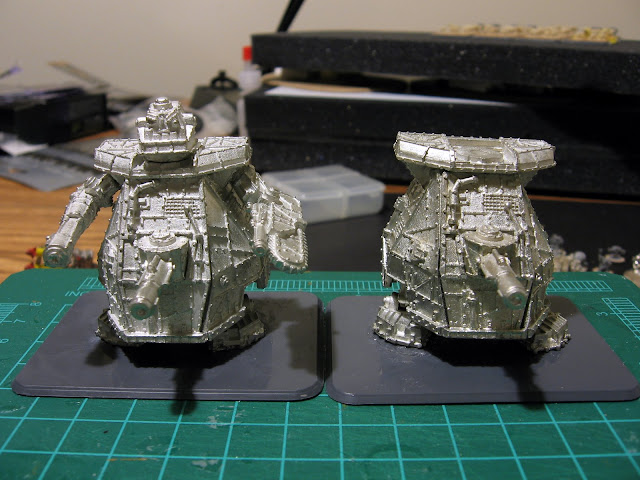 Not a lot of progress on the Landing Craft. I essentially washed the green, did the black and started the metal bits. I'm hoping to have this guy done by the end of the month. 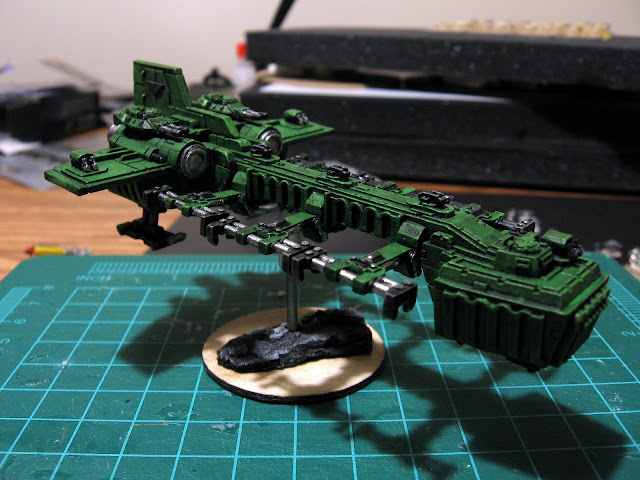 This week was War Engine Week (and some trees). I started painting my Landing Craft. The dry brushes are done, next week I'm hoping to do the black, gunmetal and washing. 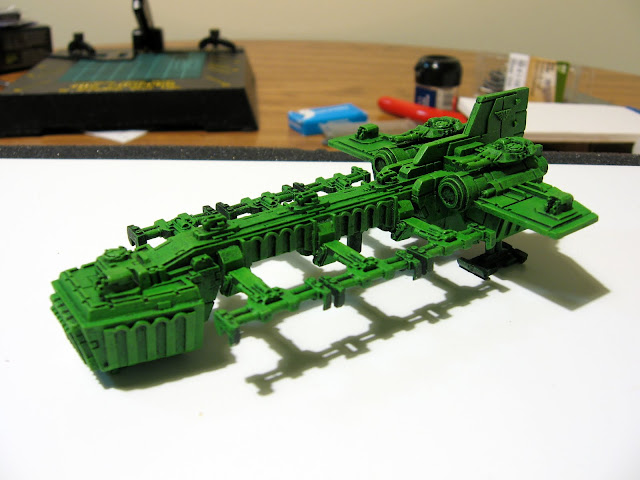 The trees are finally flocked and done. Behold them in all their foliaged glory! 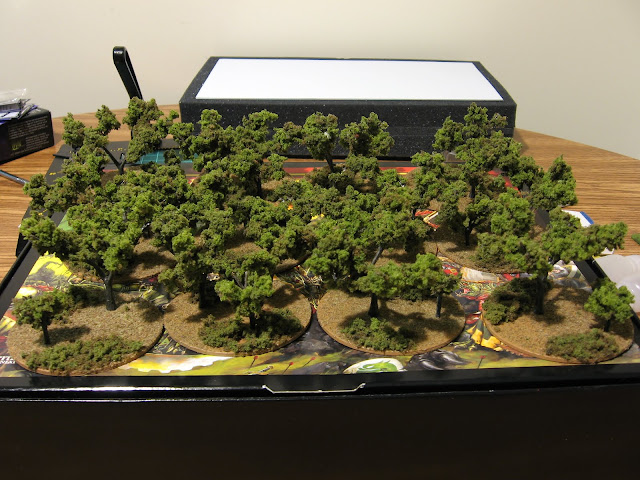 My plan is to use them with some bases I made last year, like so. The bases by themselves represent scrub, with the tree bases on them they're forests. I left room on all the bases for the trees, so they fit snugly between the bushes and rocks already on them. 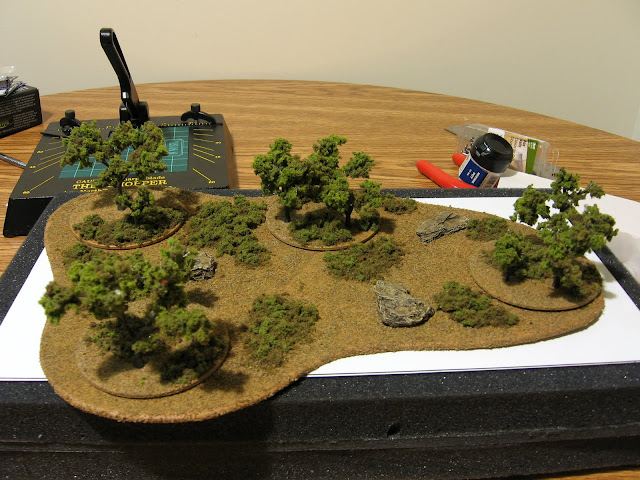 And finally, here's my Warlord I started building. The Volcano Cannon and Gatling blaster are from a FW Reaver, I need to plasticard them up some longer arms. The TLDs I've modified so they aren't firing off into the sky. Once the weapons are glued on all I have to do is putty up some gaps (and paint it :P). 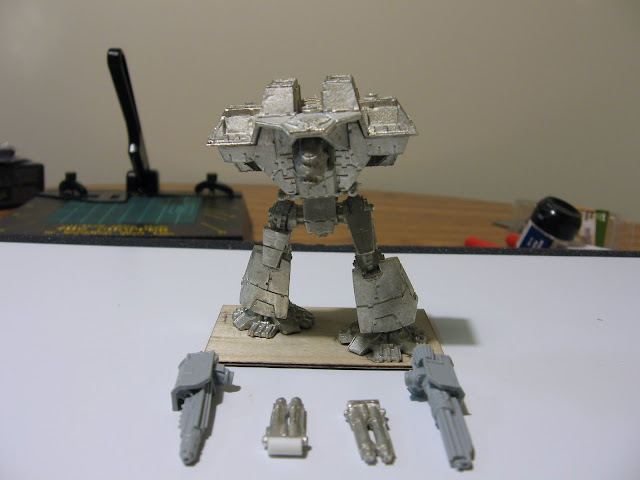 Didn't quite get this stuff done for HAVOC, and I also grabbed the wrong underbrush color from my local store last night. Once I get the right color for the trees these will be good to go. 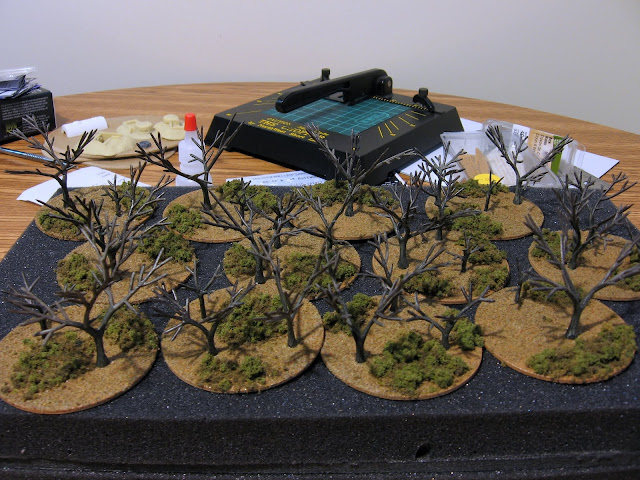 I used wooden bases that I got at Michaels for cheap, Woodland Scenics tree armatures (which were primed brown, dry brushed light brown, gray, and then washed with green and brown) and WS underbrush and course flock.