So with my work on the MERCS figures I needed something smaller than 6mm to help me average out closer to 6mm, to that end here's some 2mm Brigade Model Land Ironclads! 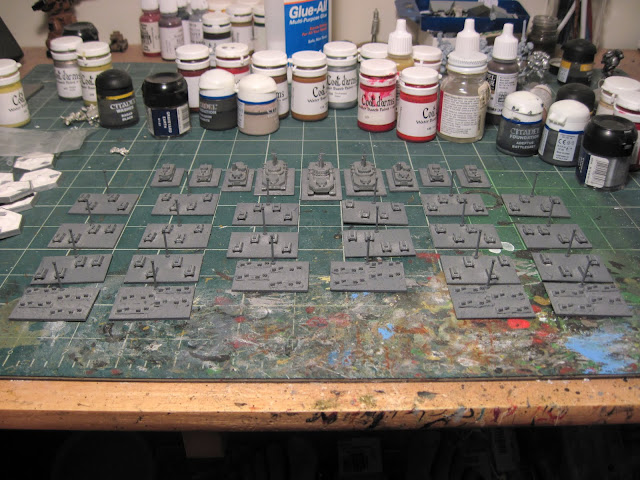 I've been slowly building and assembling these guys over the course of the year. The infantry crack me up, not sure I'm going to be able to do more than 3 colors on them. 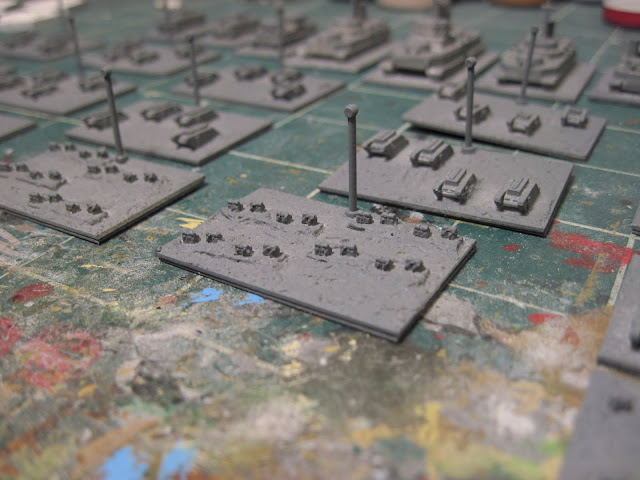 I really like the look of the British Ironclads though. Not sure what I'm going to use them for yet, I may give the Wessex rules a try, or maybe put together a Starmada mod or something homegrown. 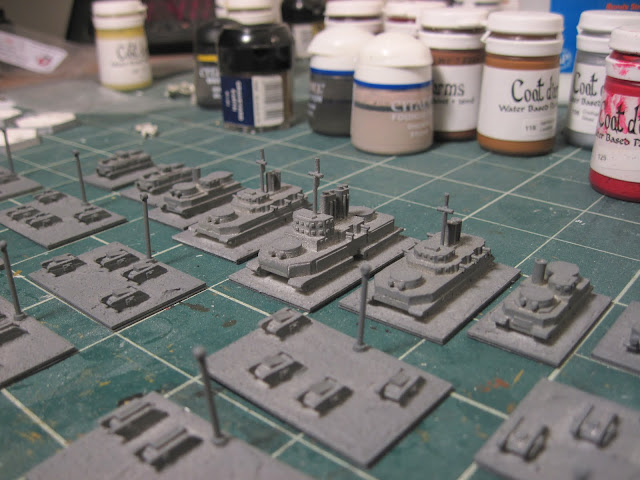 As for the CCC figs, I finished the black undersuit and began work on the webbing and what not this week. I think after a highlight I'm going to try some color bleeding with a dark green/brown color to tone it down. 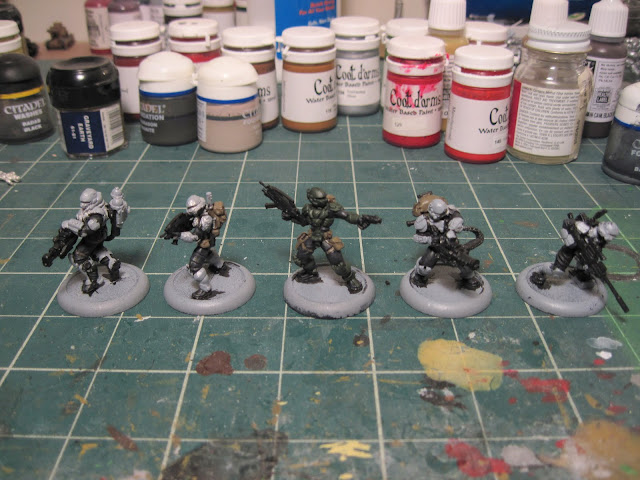 It's definitely a pain trying to get paint in certain areas though, assembling them after I painted maybe could of worked better but I'm sure that would have had its own problems. 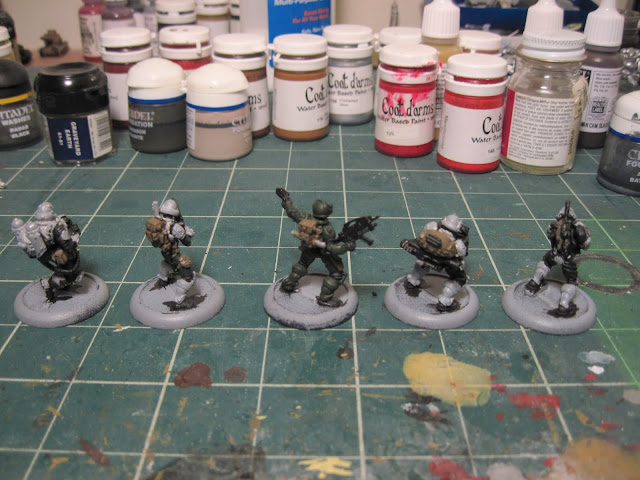 I wanted to see what the armor would like like so I started that on the Assault Leader as well. This is after a base coat and a shade. 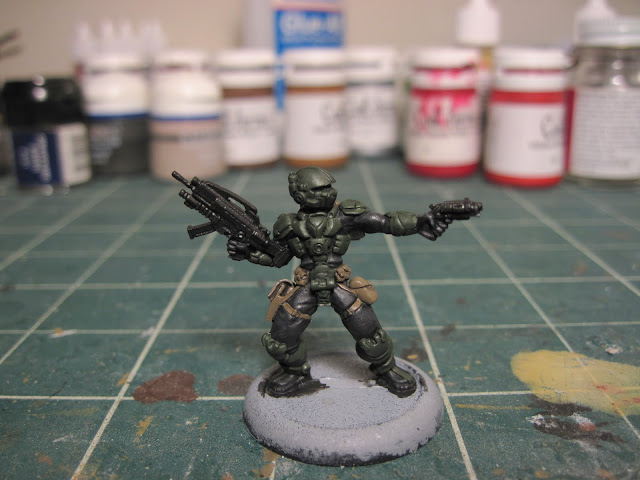 I'm planning on giving it two highlights in addition to these, we'll see how that works out next week. 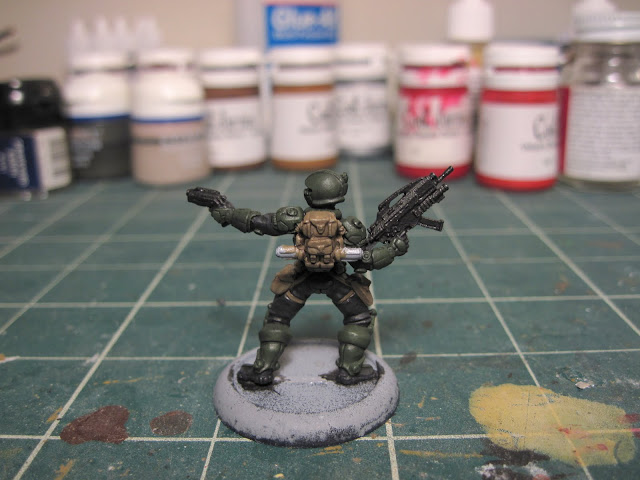 Thanks to a rather productive day off on Monday I finished the Genestealsers this week. I thought they painted up pretty good. 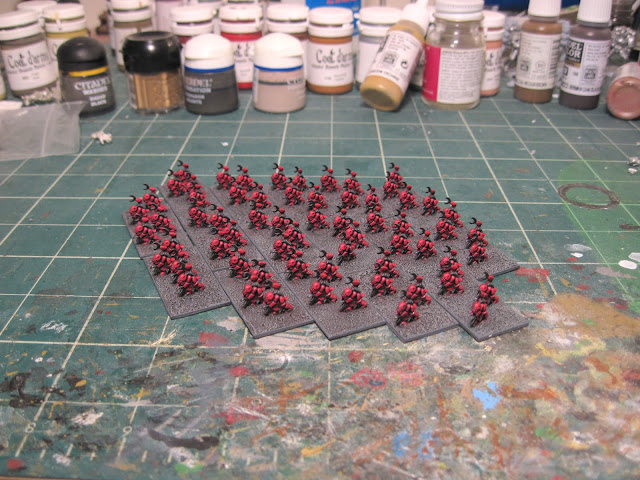 I also got a chance to try out some other colors with the red, namely the purple for the tongue. I think the pallet is going to have to be expanded for the bigger bugs and this purple is in the running for one of the secondary colors. It's rather pinkish but not "pepto pink". 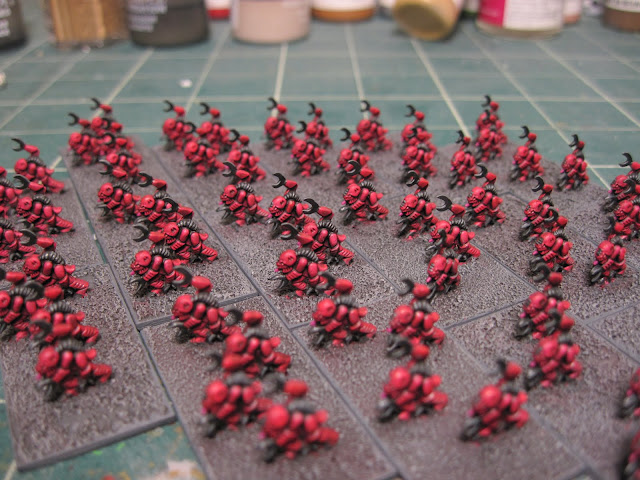 I also built and primed my CCC squad for MERCS. Trimming the mold lines took awhile, they're pretty well hidden but you can definitely see them in the right light. 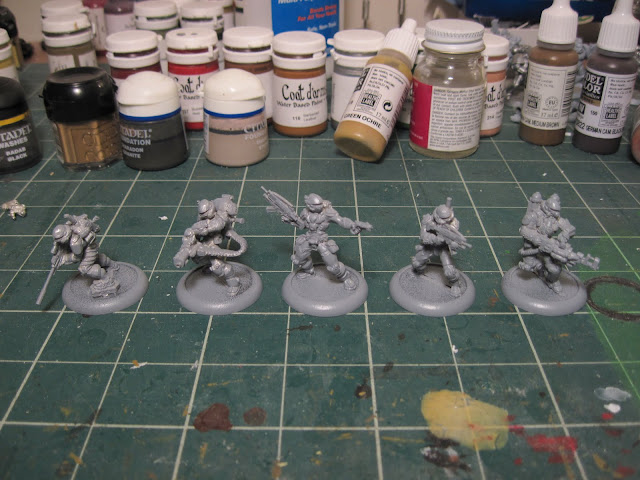 I also converted the sniper. I didn't like the t-shaped barrel exhaust doohickey and went with a standard flash suppressor/silencer look. The same goes for the trucker hat head, that came off too. Thanks to Rob for supplying the spare helmeted head. 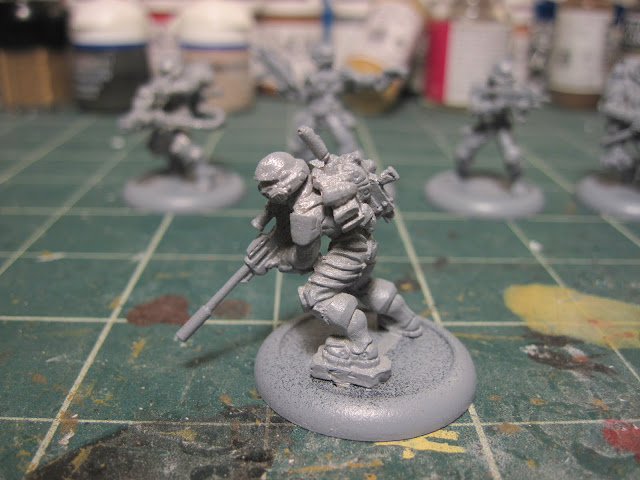 I finished the 16 stands of Warriors this week. I was worried the bases wouldn't match the Termagants and Hormagaunts as they got the spray treatment and the gravel looked red-tinged after the basecoat. The drybrush took care of that though so all is well in Tyranid land. 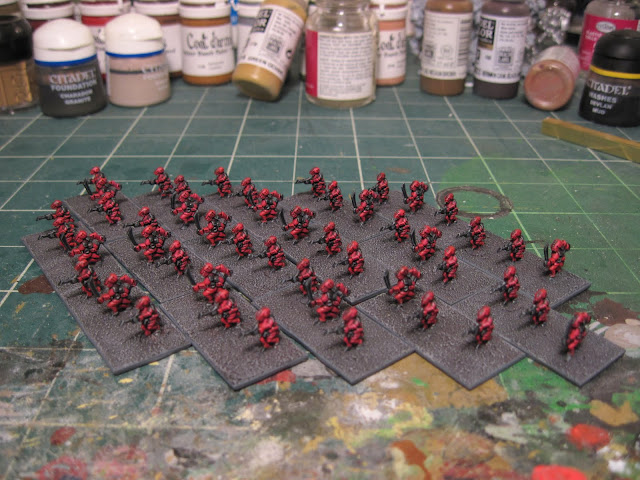 Up next are the Genestealers and a quick jaunt into... (dramatic pause) 28mm land! 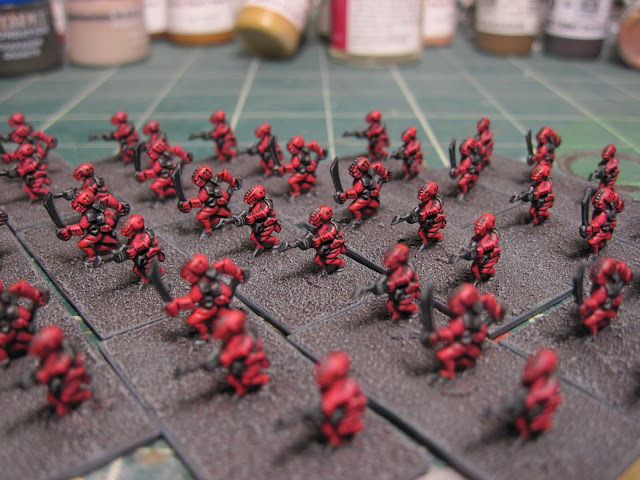 Continuing on with the Necrons for the Worst Army List Ever I managed to wash, drybrush and base my retinues and their upgrades. I don't think I'll do too much more work on them before next weekend but at least at this point their decent enough for the table. 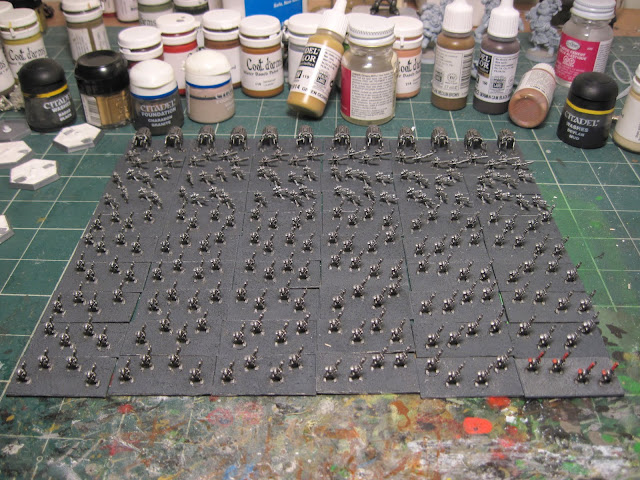 Beyond what's pictured I want to do some Wraiths at somepoint, but that'll be it for the retinues. 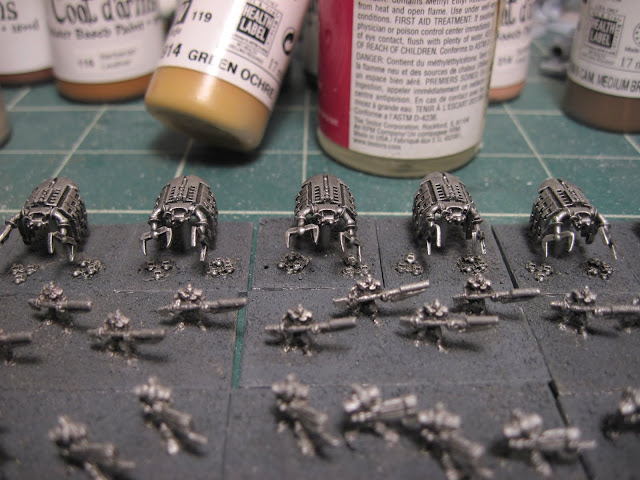 I also finished the black detailing, base base-coat and the wash on 16 Warriors. The wash came out a little messier than on the Hormagaunts and Termagants, I'm thinking it's because the Warriors are a little bigger. I'll probably have to go back and touch up the red. 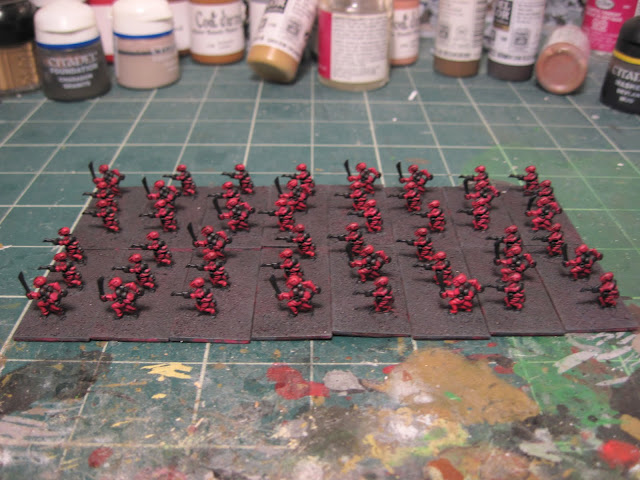 Beyond that, I just need to highlight the black and finish the bases and they'll be all set. 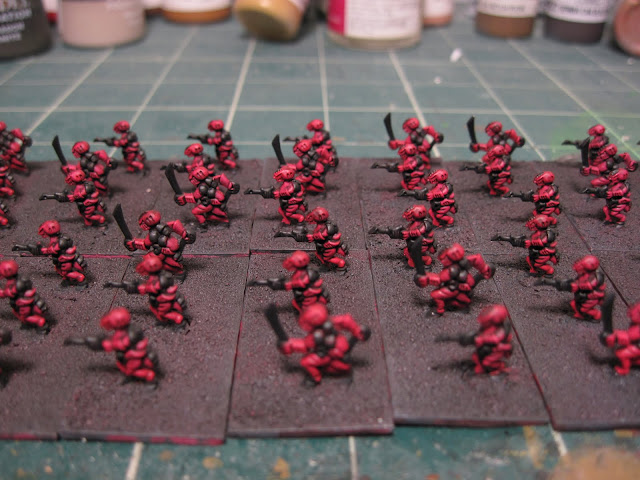 A bit of a late update, but the Hormagaunts are done. In addition, I turned my whole 'nid army red last Monday with a little help from my airbrush. No more base coating for me. 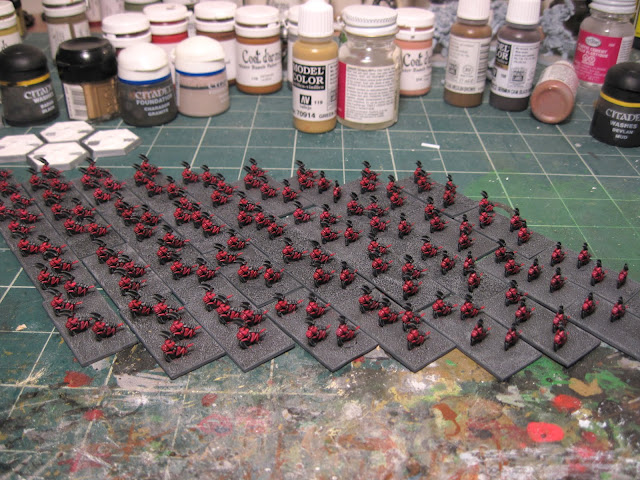 I ended up finishing the bases over the weekend and then started the Warriors yesterday. More pictures of those Friday. 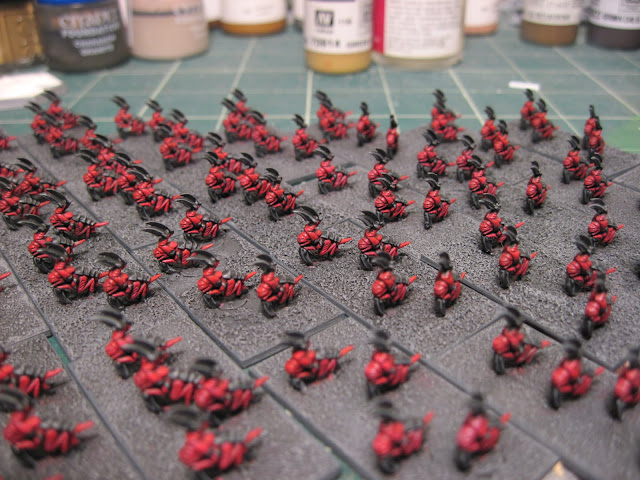 I also based and washed these guys over the weekend too. Their skeletal buddies also got a a bunch of washing and dry-brushing. 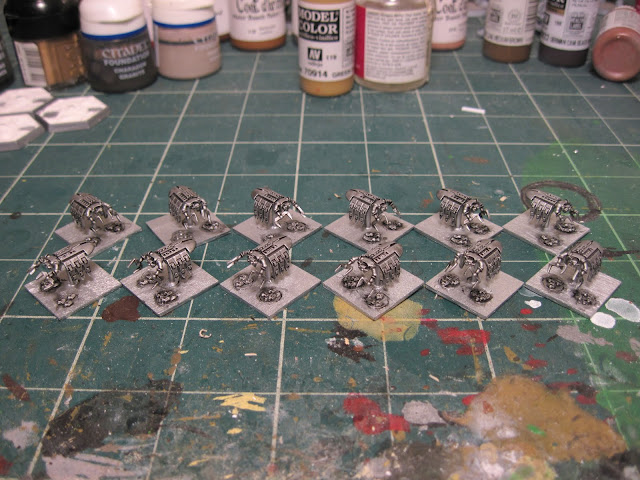 I figured I'd take them down to PA with me on the 12th maybe for the Worst Army List Ever competition. 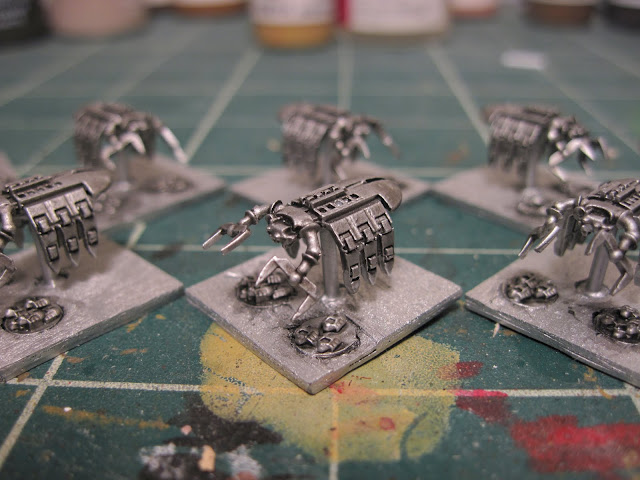